Here in ESS, we are practicing dancing, singing and acting in English with a central focus on performing a musical at Saint Paul Festival.  We have performed some masterpieces like “MAMMA・MIA!” and “West Side Story” in the past and this year, we’ll try to perform the original musical “Snow White and the evil spell”, which is based on the Disney movie “Snow White”.  As well as dancing, singing and acting as a cast member, you can engage in stage sound operating, stage light operating and set making as a staff member.  You can also find new possibilities within yourself and feel fulfilled by building up a performance with all the members.

Along with the Saint Paul Festival, we hold some performances only by junior high school members in September and the ESS assembly at the sister school in December.  We are practicing hard to improve our performance skills, learning from each other and supporting each other.

(written by Akari I.)

Hello!  We are English Speaking Society, which is called ESS club!  The purpose of our club is to practice musical mainly for the Saint Paul Festival.  In the past, we have staged famous musicals such as “Mamma・Mia!” and “West Side Story.”  This year, we challenged on a completely original musical, “Design of Dreams.”  As in title, it’s about young boys and girls designing their dreams in their own way.

You can be a part of the club not only as a cast by acting , singing, and dancing, but also as a sound staff, a lighting staff, and a stage carpenter.  It will be a great irreplaceable experience to create a musical with the members.  Also, we have stages which is managed only by the junior high school students and the Assembly of the Kanot Shirayuri English Circle

Please come and join us!

ESS performs plays and musicals mainly for St. Paul Festival.  We have performed some famous works such as “MAMMA・MIA!” and “WEST SIDE STORY,” and this year, we’re working on our original musical.  “Snow White and the evil spell”, which is written based on the Snow White by Disney.  Not only by playing, singing and dancing as a cast, but also by working on sound effectings, lightings and stage settings as a staff, every member supports the stages.  Through creating one stage as one, we find something new and feel a sense of achievement.

Besides St.Paul Festival, we take place the stage for rookies, only performed by junior high students, and take part in the sister schools assembly.  Improving and encouraging each other, we practice hard every day.

(written by Chika I.)

In E.S.S., we perform, plays and musicals mainly in our school festival.  S.P.F. (St. Paul Festival).  In the past performance, we played masterpieces like “Mamma Mia” and “West Side Story”.  This year, we challenged to perform an original play, “Snow White and the evil spell” based on the Disney movie.  “Snow White and the 12 dwarfs.”  Not only did we perform dancing and singing, but we also took part in doing sound and light effects and stage setting ourselves as a staff.  We succeeded in making the stage with every one of the club members and were able to find some kind of discovery and achievement in it.  We also do other activities such as performing a stage made only by junior high school students or performing the stage that were played in S.P.F. on the sister school assembly.  We practice very hard every day, competing and encouraging each other.

In ESS club, we perform plays or musicals at our school festival, St. Paulo Festival.  In the past, we performed some masterpieces like “MAMMA・MIA!” and “WEST SIDE STORY”.  This year we will put on an original musical production, “Snow White and the evil spell”, which is based on “Snow White and the Seven Dwarfs” produced by Disney.

We not only act, sing and dance as a cast, but also make stage settings and become a light technician and a sound engineer as a stage crew.  By creating a musical by all of ESS members, we can find something new and enjoy a sense of achievement.

In addition to the stage of St. Paulo Festival, we have a rookie stage produced by only junior high school students and the Assembly of the Kanto Shirayuri English Circle.  We are practicing hard, improving and encouraging each other.

(written by Miyu U.)

Students belonging to English Speaking Society perform various plays and musical such as “Mamma・Mia!” “West Side Story,” which are masterpieces.  This year, we’re going to perform an original musical “Snow White and the evil spell” based on Snow White from Disney.  The member of this club not only can play, sing and dance as a cast, but also can serve as a sound engineer, lighting technician and scene-shifter.  We find something new and feel a sense of achievement every time we make up a stage together.

Our club has a lot of events such as St. Paul Festival, the stage of only junior students and the session of sister schools.  We continue to compete in a friendly way and encourage among members, making efforts day by day.

(written by Mizuho A.)

We, the English Club, perform plays and musicals mainly at school events like St. Paul Festival (SPF).  Masterpieces such as “MAMMA・MIA!” and “WEST SIDE STORY” have been presented in the past.  This year, we are going to challenge doing “Snow White and the Evil Spell”, which is an original musical based on Disney’s “Snow White”.  Acting, singing, and dancing as a cast of course, staffs can be a part of the musical through carrying out tasks that involve sound controls, stage lighting, and stage setting.  By making one special stage with the hands of every single club member, new discoveries can be made and your heart will be filled with contentment.

Other than the SPF, there is a newcomer show which only junior high school students take part in, and also a sister school meeting. We’ll work hard every day cheering each other up and enhancing each other! 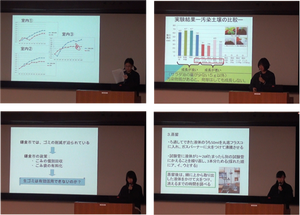 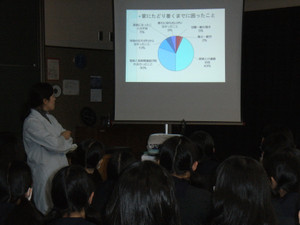 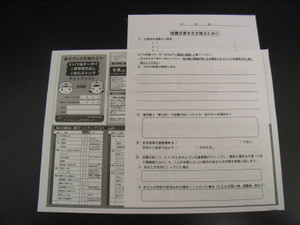